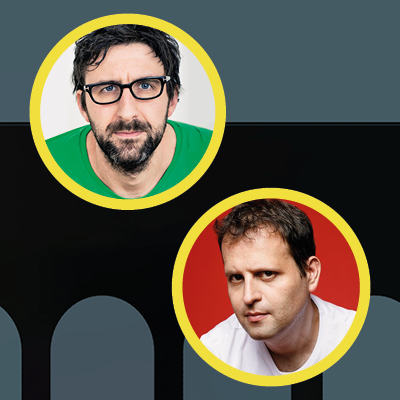 We are partnering with some of the country’s top regional theatres and independent bookshops. The ‘book and ticket’ package includes a unique ticket for the live stream and a copy of Contacts, worth £14.99, deliverable to any UK address.

The event will initially be broadcast on 2 November at 18:30 UK time. It will be available to view up to 48 hours after the event has ended and can be accessed Worldwide.

Acclaimed author and stand-up comedian, Mark Watson, is celebrating the publication of what is being hailed as ‘his best book yet’, Contacts. For this exclusive livestream, Mark will be live in conversation with best-selling author and award-winning performer Adam Kay for what promises to be a thought-provoking and uplifting evening.

As well as answering your searching questions, Mark and Adam will discuss the importance of kindness, the weight of loneliness, and how it’s never too late to reach out. You don’t want to miss this.

Mark Watson is the acclaimed author of six books, most recently The Place that Didn't Exist, Hotel Alpha, and The Knot, which have been published in twelve languages. He is also a stand-up comedian and has won numerous awards in Britain and Australia. He regularly appears on TV, has had his own cult Radio 4 series and been named the Edinburgh Festival’s highest achiever of the decade by The Times.

Adam's first book, This is Going to Hurt, revisiting his former career as a junior doctor, has spent over a year at number one in the Sunday Times bestseller list. It was the bestselling non-fiction title of the decade, it is the bestselling non-fiction e-book of all time, and has sold over 2.5 million copies. As an award-winning live performer, Adam has sold out multiple Edinburgh Fringe runs, West End seasons and UK and international tours. His current tour of This is Going to Hurt has been seen by over 200,000 people.

This event is produced in Partnership with Harper Collins.

Hot on the heels of his My Last Supper book launch hosted by Grace Dent, Jay performs the show inspired by the book, streamed from London’s Crazy Coqs at Brasserie Zédel. Imagine you have j...
BOOK NOW
See more –›
Click here

Join Stephen Fry – multi-award winning comedian, actor, presenter, writer, and masterful storyteller – for a captivating evening in, as he at last tells the passionate and powerful story of Troy. Curl up on your sofa as Stephen brings ...
BOOK NOW
See more –›
Click here

Rachel Bloom has felt abnormal and out of place her whole life.But in exploring what she thinks makes her "different," Rachel has come to realize that a lot of people also feel this way; even people who she otherwise thought were ...
BOOK NOW
See more –›
Click here

“There are so many people in this world - 7.53 billion to be exact. But there is only one of me and one of you. It's easy to think we are not good enough, or that our nose is too big, or wish we could be more like our friends. But the wo...
BOOK NOW
See more –›
Click here

Antler headbands and eggnog at the ready! The High Low is thrilled to be coming back in LIVE form (well, as live as they can be right now) for an indecently festive extravaganza.And it's a very special one indeed. This is the l...
BOOK NOW
See more –›
Click here

After winning 2015's Great British Bake Off, Nadiya Hussain went on to capture the hearts of the nation with her own food inspired travelogues, bestselling books and BBC cookery series.Now, she returns to ...
BOOK NOW
See more –›
Click here

Like Father, Like Son is the most personal book that Sir Michael Parkinson has ever written.  For the first time, he attempts to explore where his father came from and what shaped him in his life before Sir Michael was even a twinkling i...
BOOK NOW
See more –›
Click here

London, 1938. This Christmas, you are cordially invited to the wedding of the year!Household name and all-round entertainer Anton Du Beke is one of the most instantly recognisable dancers today, best known for his ...
BOOK NOW
See more –›
Click here

For one night only, writer, comedian and actor Dawn French will be live in conversation to celebrate the publication of her latest novel Because of You (Penguin Michael Joseph). Dawn will be kicking of...
BOOK NOW
See more –›