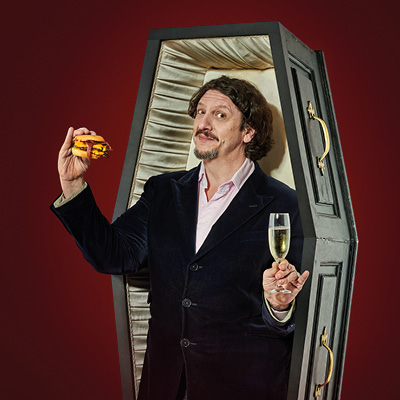 We are partnering with some of the country’s top regional theatres and independent bookshops. The ‘book and ticket’ package includes a unique ticket for the live stream and a copy of My Last Supper, worth £9.99, deliverable to any UK address.

The event will initially be broadcast on 28 November at 18:30 UK time. It will be available to view up to 7 days after the event has ended and can be accessed Worldwide.

Hot on the heels of his My Last Supper book launch hosted by Grace Dent, Jay performs the show inspired by the book, streamed from London’s Crazy Coqs at Brasserie Zédel.

Imagine you have just one meal left. What are you going to have?

It’s the question award-winning restaurant critic, MasterChef judge and writer Jay Rayner has been asked most often by audiences across the UK. He was asked it so regularly that he decided the time had come to investigate the concept of the last supper and why it intrigues us so. Is it because of the opportunity it presents us with to let your appetites run riot? Or is it because it’s a greedy way in which to tell the story of your own life? And if so, what would a man like Jay Rayner, who for two decades has made a living eating out in restaurants, choose to put on
the menu?

In this life-affirming show, Rayner investigates our fascination with last suppers and tells the stories of the killer dishes that would end up on his table: how he was introduced to oysters by his late mother, how he almost burnt down a hotel because of his love for snails in bubbling garlic butter and of the many ways by which the mighty pig has fed him over the years. My Last Supper follows the success of his sell out shows, My Dining Hell and The Ten Food Commandments, which have taken audiences by storm across the UK, Australia, New Zealand and the US.

My Last Supper with Jay Rayner. It’s a show to end them all.

‘I’m delighted that My Last Supper is being streamed in aid of The Food Chain, the brilliant charity providing nutritional advice and support to people with HIV, of which I am honoured to be patron. Your money will be put to very good use - Jay Rayner’.

Set in Derry, Northern Ireland in the 1990s, award-winning Channel 4 comedy Derry Girls is a candid, one-of-a-kind comedy about what it's like to be a teenage girl living amongst conflict.It's a time of armed police in arm...
BOOK NOW
See more –›
Click here

Hot on the heels of his My Last Supper book launch hosted by Grace Dent, Jay performs the show inspired by the book, streamed from London’s Crazy Coqs at Brasserie Zédel. Imagine you have j...
BOOK NOW
See more –›
Click here

Join Stephen Fry – multi-award winning comedian, actor, presenter, writer, and masterful storyteller – for a captivating evening in, as he at last tells the passionate and powerful story of Troy. Curl up on your sofa as Stephen brings ...
BOOK NOW
See more –›
Click here

Rachel Bloom has felt abnormal and out of place her whole life.But in exploring what she thinks makes her "different," Rachel has come to realize that a lot of people also feel this way; even people who she otherwise thought were ...
BOOK NOW
See more –›
Click here

“There are so many people in this world - 7.53 billion to be exact. But there is only one of me and one of you. It's easy to think we are not good enough, or that our nose is too big, or wish we could be more like our friends. But the wo...
BOOK NOW
See more –›
Click here

Antler headbands and eggnog at the ready! The High Low is thrilled to be coming back in LIVE form (well, as live as they can be right now) for an indecently festive extravaganza.And it's a very special one indeed. This is the l...
BOOK NOW
See more –›
Click here

After winning 2015's Great British Bake Off, Nadiya Hussain went on to capture the hearts of the nation with her own food inspired travelogues, bestselling books and BBC cookery series.Now, she returns to ...
BOOK NOW
See more –›
Click here

Like Father, Like Son is the most personal book that Sir Michael Parkinson has ever written.  For the first time, he attempts to explore where his father came from and what shaped him in his life before Sir Michael was even a twinkling i...
BOOK NOW
See more –›
Click here